A well befriended couple were expecting their first child. When I recently was visiting them, they shyly asked me if maybe I could let the baby talk to me telepathically. We took the computer at hand, and holding the hand of the mother we started with a general question:
“Little child, is there something you want to say ?” The baby seized this opportunity to transmit wishes, preferences and good advice.

- “I want to dance a little to beautiful music with my mom, now and also after I’m born.
And with dad I want to babble and laugh later on.
And when dad is telling things that aren’t true then sometimes it will confuse me because I tend to believe everything he says, so it’s well possible he only tells things that are true, because otherwise I have to learn to think critically much too soon and that’s difficult, also for you but also for me.
If mom says she loves me and that she’s happy with me, and later on that I’m so beautiful, then it makes me happy and calm.”

In a telepathic contact with an unborn I often feel if it’s a boy or a girl right away (and usually I’m right!), but now I couldn’t decide what it was. As if the baby wanted to keep it a secret….
Then mom asked a question about ultrasounds (the first one – in week 8 – was already behind them), what it feels like for a baby and if everything was alright ? If the baby wishes to say anything about it. 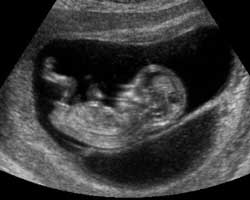 - “Mom shouldn’t worry about me, just be happy with me, and trust that everything is running perfectly and will be also perfect.
Ultrasounds are not so nice, it creates a certain irritant electrical feeling inside all of me and I’d rather escape from it, but I’m glad mom saw me.”

The parents were somewhat shocked about the ultrasound being so unbearable, and immediately planned to cancel the coming ultrasounds. “But when I’m 20 weeks pregnant, I’ll have one to know if you’re a boy or a girl”, mom said.

- “If mom wants to know what I am I will send a little dream, but not yet.
The ultrasound is right by me, but I’d rather have it a few weeks later, because the later it is, the easier for me because then I’m bigger and less penetrable.
Now I still resonate and that’s why it becomes so frightful to me.
That’s how babies are, they resonate, so I resonate also with every thought of my mom, and every thought my dad has about me, that’s a small difference.
And when I become bigger, I learn to vibrate only with me for the main part, but that’ll take years, until I have grown up.

In the end mom and dad asked the baby what it felt like about home birth. The little one immediately had a witty reply :

-“My mom is the only thing I need [to be born], and someone to catch me. All those people in hospital are far too hasty and think much too soon that things should be done differently.”

Back to all blogs