PART 1 (Before leaving + journey until the first night)

Laura doesn’t talk as we do, but she can communicate with a letter board if she’s given support for her hand. It’s a form of telepathy. She usually does this kind of talking with her sister Marie.

During the trip we noted some things down (however, noting down is not something we always do, because who writes down everything that is being said? Still, because her words are rare and sometimes very meaninful, they mean a lot to us. Otherwise you keep asking yourself ‘what is going on in that child?’ How it is for her, not being able to talk, that’s something else. Not easy for both parties).

For this travel account, we showed our pictures to Laura (who has a very good memory, she hardly ever forgets anything in fact). What Laura said during the trip or afterwards as comment to the photos is marked in blue. We planned on making this diary from the start, that’s why we have a lot of pictures of Laura. 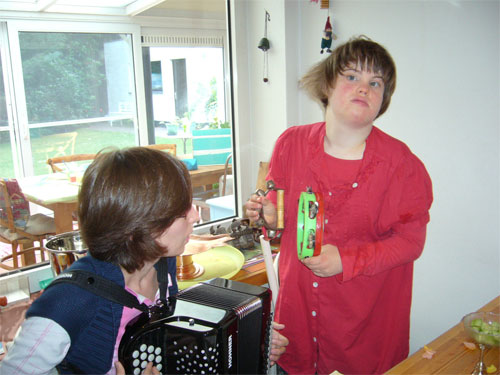 Laura has been to the Ashram before (and traveled through the south of India) in 2000. She has experienced Swami Premananda from up close and received many blessings. Later on, she received a Shivaratri Lingam from Swami and now occasionally does puja for it, mainly accompanied by singing and music. 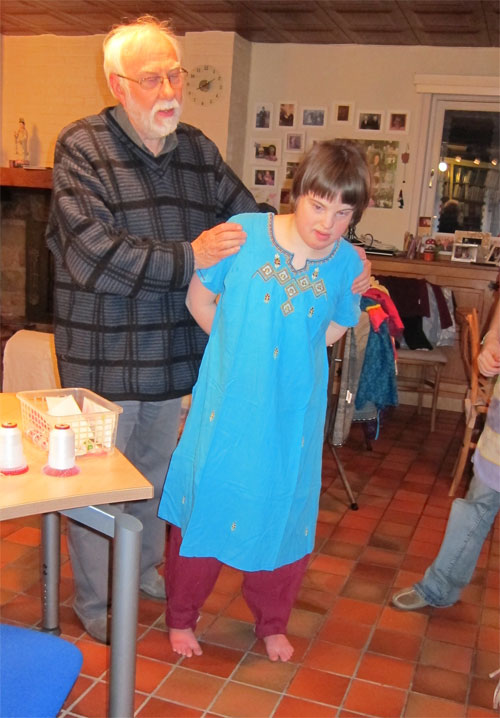 my mom can sow very well

The night before our departure:The sowing machine was pulled out from the back closet here. We dug up a number of our Indian clothes and made them shorter where necessary. Laura is clearly pleased. She’s showing off her outfit with her Dad. 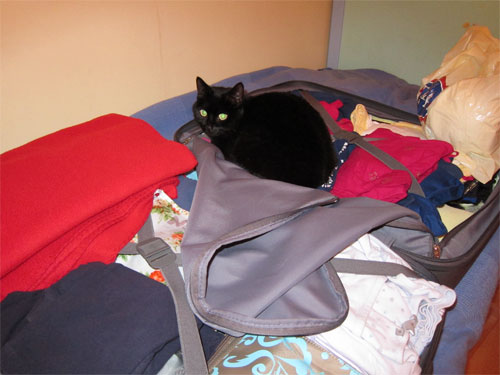 I had said the little cat wanted to come with us in the suitcase – which is obviously an absurd thought.

The night before our departure:

I think I won’t know what to do 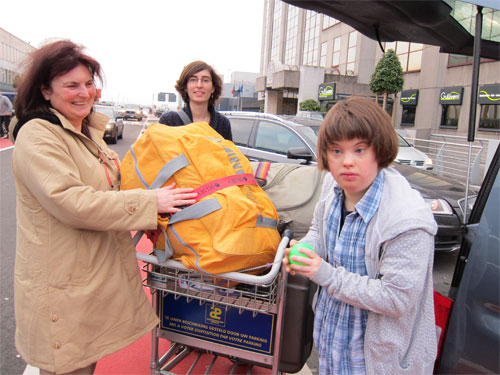 going along is very exciting because everything is almost new

Martine (on the left) brought us; we have a long tradition of driving each other to the airport.
(Sister Marie is in de middle) 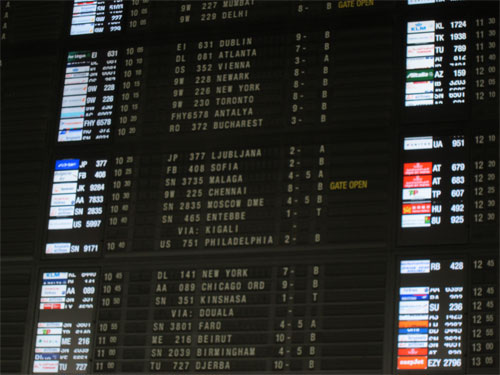 Chennai, a destination among many others 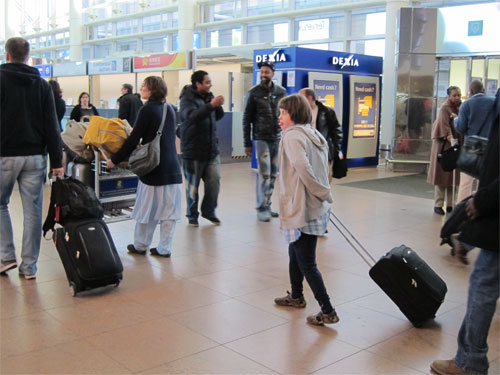 Whenever things get a bit much, Laura sticks out her tongue; she never does it for no reason. 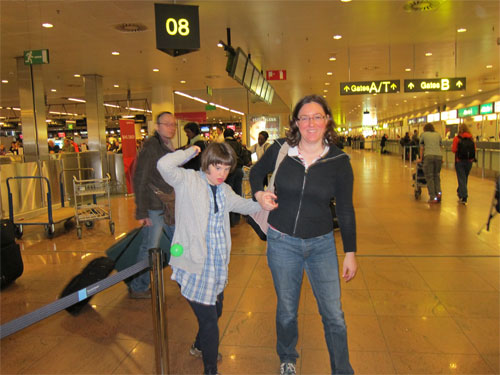 my eldest sister is there too

In fact, eldest sister was supposed to go to India to do a wedding ceremony there. It was also the reason why the parents of the groom bought a ticket. But then it turned out the wedding was cancelled because our Swami passed away. But as you can see, we keep our spirits up. 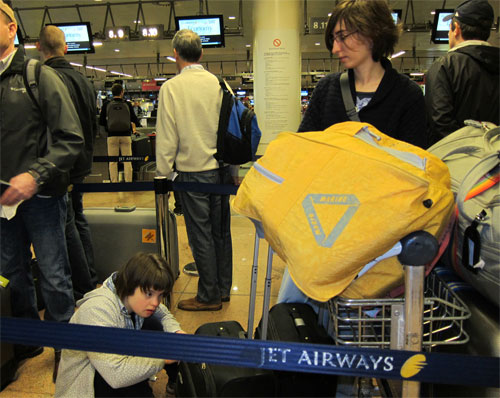 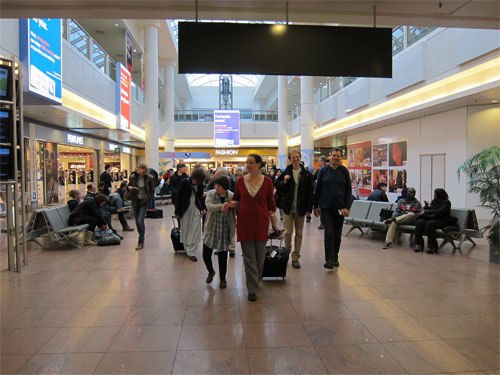 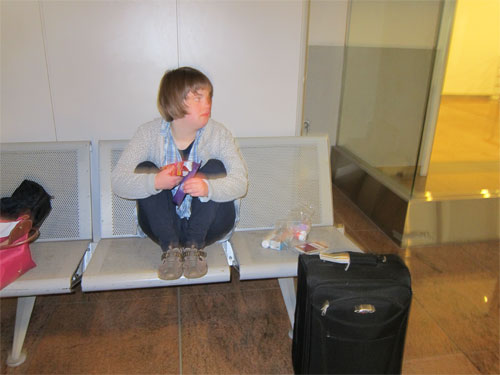 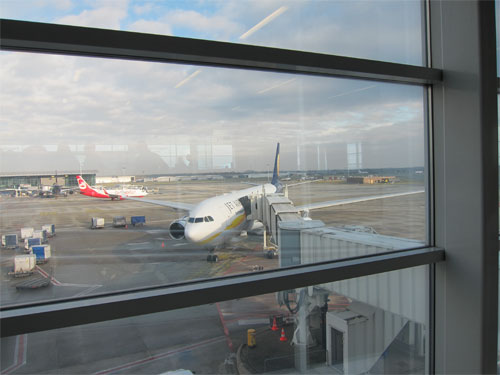 Waiting to check in, walking quite a bit, waiting again for the hand luggage check and admiring the airplane, Laura’s comments to all of those pictures is very brief. 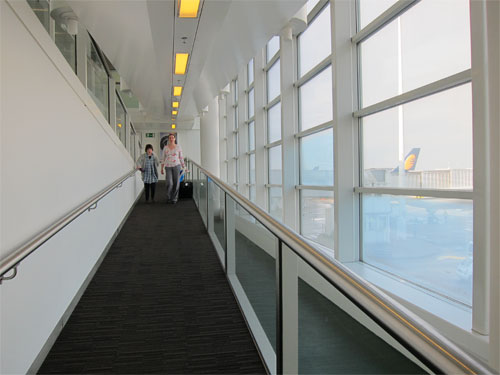 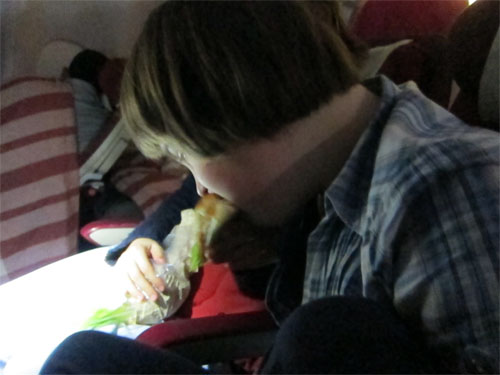 in the airplane, I was really scared first and I was holding mam but when we just kept flying nothing special happened
soon I didn’t feel so nervous anymore, only because the air was so different but it was all right 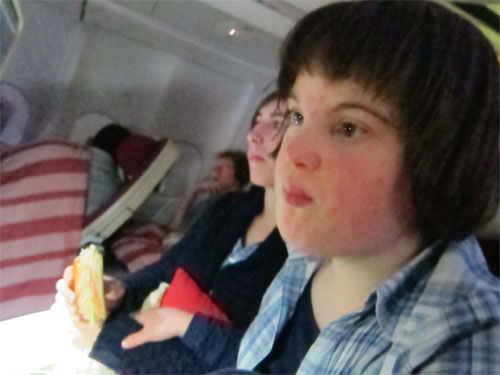 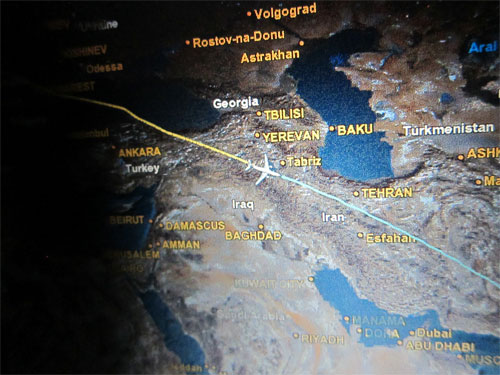 This is where I pointed out the place grandmother was born, at the top in the middle of the little screen. 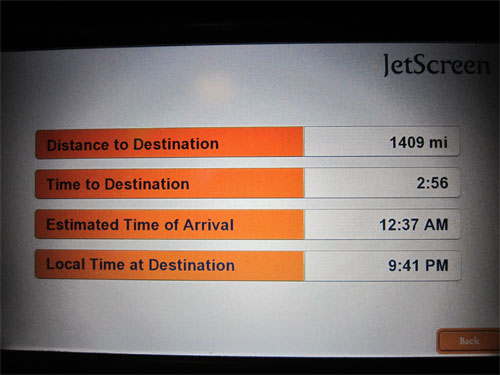 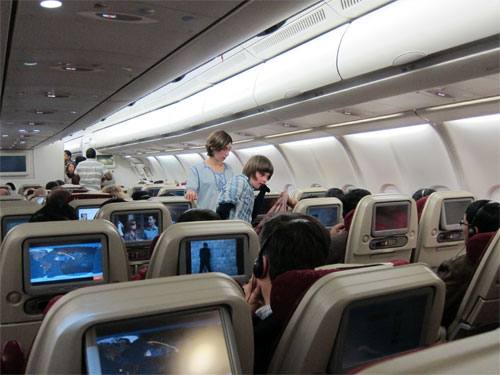 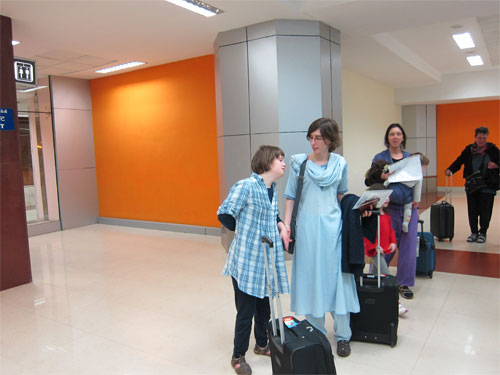 I’m happy that we arrived 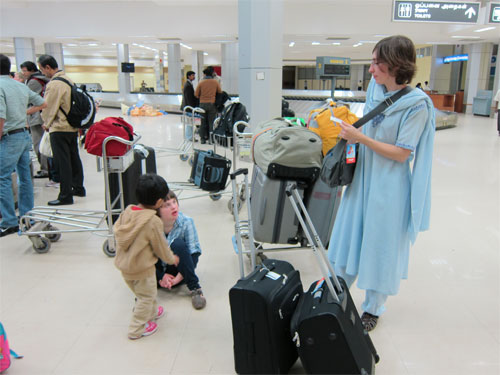 As a mother, I always enjoy seeing it, when people come up to Laura very spontaneously and you feel a lot is happening 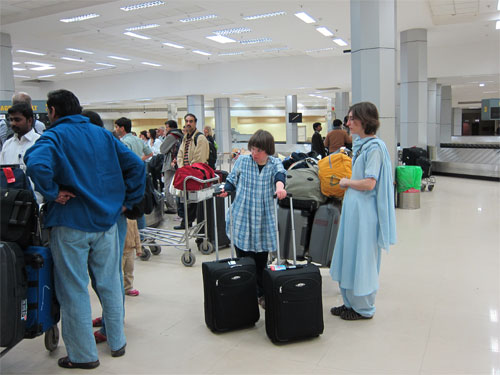 I can remain standing quite well in my long-expected journey 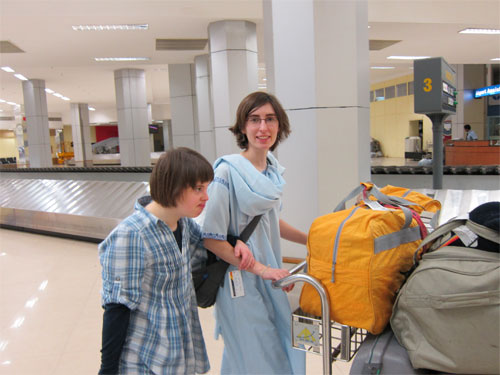 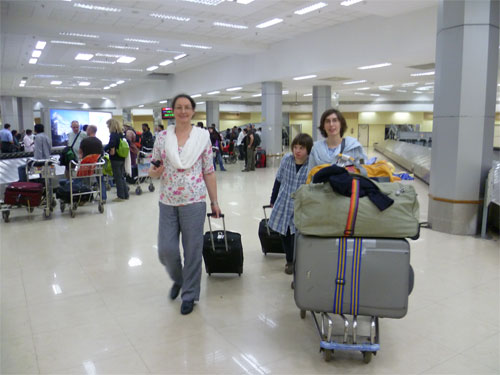 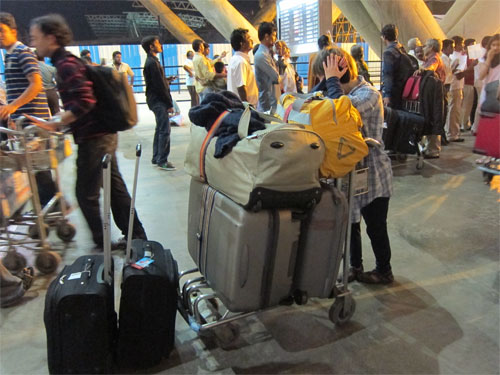 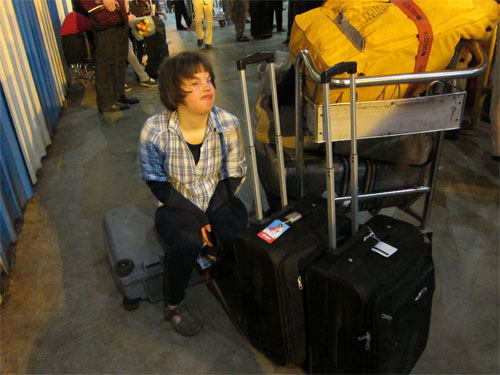 7.30 pm Belgian time, midnight local Indian time, we land in Chennai. Because we were the last to get on the plane, our luggage comes down the conveyer belt right away. We say goodbye to the 5 others who booked their own hotel and whom we will join again tomorrow and go out. We look out for the sign of our taxi driver to bring us to our hotel, to no avail. It’s an expensive hotel because of Laura, close to the airport and comfortable. The other drivers bearing signs are very cooperative for us, making phonecalls until their ears are ringing. They get in contact with our hotel, where they don’t know anything about us, despite many mails back and forth weeks beforehand and reservation confirmations on all sides. Marie is sent out to find a solution, what Laura calls ‘running around’, while we stay waiting for nearly an hour in the oppressive night heat and airport buzz. Laura soon tires of standing up and wants to lie down on the floor, which is really not a pretty sight, so I make her sit on one of the suitcases; but she’s quite happy with that. In the meantime Marie is addressed in British English by two young guys who remember her from the ‘Youth’ meeting 4 years back in London, and she can inform them that the day after tomorrow there will be a big ceremony in the Ashram for Swami Premananda’s funeral (or how should I put it). They feel a bit awkward to go there without having informed the Ashram first but Marie assures them that there will be a place for them, and they decide on the spot to go for it and leave for the Ashram any way they can, by bus or otherwise. What a beautiful coincidence.

Without any luck for finding a hotel, Marie comes back to us and then notices an Indian man she once met before as staff in a hotel, and she says, “I know your face!” “Me too” the little keen man replies. He still works for the hotel and soon enough, he and two other hotel people (of other hotels) are trying to win us over by bidding up against each others’ offers. Abdul Salaam – the ‘face’ – is trying very hard and can offer a taxi and a hotel (with free extra bed because there is three of us) for half of the normal price, incl. lots of stars. That last bit remains to be seen, but we are very happy with the whole story and the help of our divine Master, who arranges meetings seemingly miraculously, who apparently doesn’t want us to spend a lot of money yet takes very good care of Laura. The name of the hotel has ‘Raja’ in it, which means ‘king’. It’s a win win situation 🙂 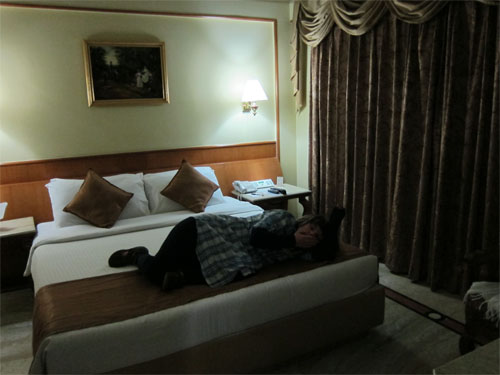 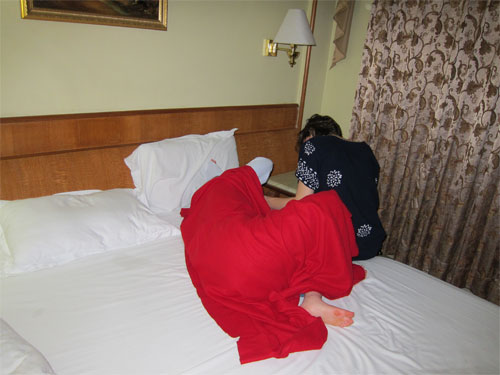 Back to all blogs